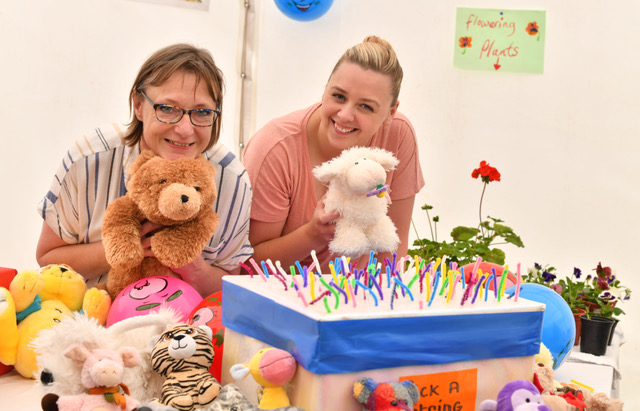 A remarkable £4,500 was raised at this year’s Bodmin Community Hospital summer fete.

After having to postpone the fete in June due to unforeseen circumstances, the Bodmin Community Hospital League of Friends, who organise the event each year, rearranged the fete for Saturday 21 September.

The £4,500 raised at the event will go onto provide equipment and additional services to Bodmin Community Hospital which are not usually supplied by the NHS.

As she does every year, Tina Roberts, otherwise known as ‘Firebird’ give her time, talent, music and entertainment to MC the fete completely free of charge, and this year added another talent to her cast of stars: her young quadriplegic son, Bobby Roberts. Bobby opened the proceedings by playing “‘World in Union’ faultlessly on his keyboard which left not a dry eye in the house”, according to the hospital’s League of Friends.

Susie Gore, Chairman of the League of Friends said: “The fete could not have gone ahead the second time around without the help of Cornwall Council, Bodmin Town Council and Midas, who all worked together to ensure the rose garden of the old St Lawrence’s Hospital site was available for the hospital fete prior to being developed.

“We are so grateful to so many. To Jill Murphy, whose presence at the fete was delightful and so much appreciated, especially by all the young and not so young Worst Witch fans. To Tina and to all the organisations who helped, including, Norman Trebilcock of FLEET (the land ambulance charity), to the Bodmin Lions and Rotary Clubs who did a wonderful job helping to set up and dismantle the gazebos, tables and everything else. To the young performers who were all outstanding: Bodmin Town Youth Band, Future Youth Dance and Bodmin Musical Theatre Company, to the Bodmin Army Reserves who erected two of their gazebos to shelter the band and who helped with dismantling.

“We would also like to thank Jenny Hick, the dog show judge who turns out every year to make this event so popular; the Kernow Party Karts team; face painter, Louise Wadsworth;  Matthew Adams, the Balloon Man and the fire engine team – all who braved the weather to put on a great show.

“Many thanks to all the wonderful Friends who baked a second time around and who came to help on the day; to all the local businesses who donated plants, cup-cakes, scones, prizes and so much more. Thanks to the staff at the hospital who, despite their busy jobs, set up a wonderful selection of stalls and games; to all friends and families and last but not least, the brave public who came to spend their hard earned cash, generously making the fete against all odds a very successful and enjoyable day”